Read More "> Lap Chickens Journal - How much risk of illness from pet chickens?
150 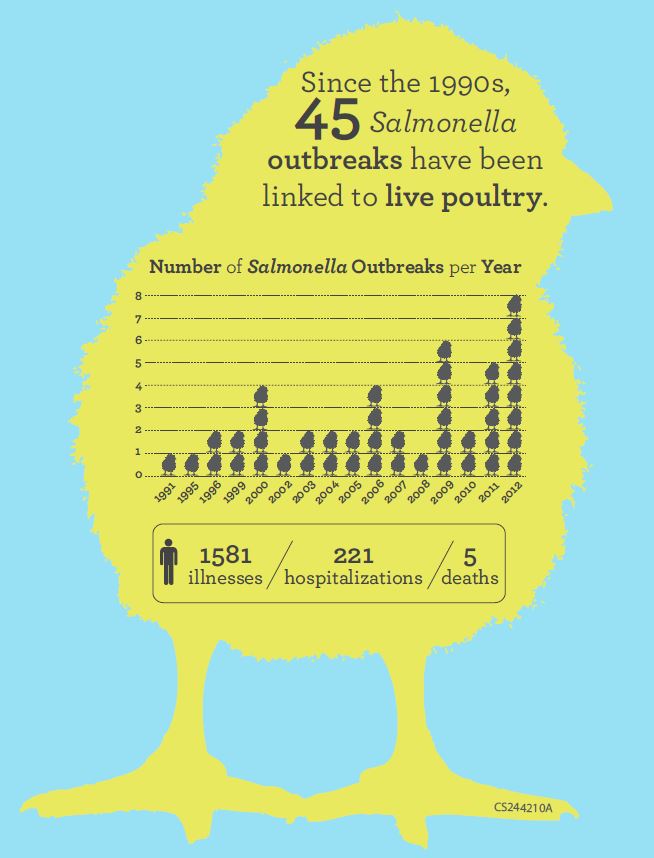 How much risk of illness from pet chickens?

[image above adapted from CDC: http://www.cdc.gov/zoonotic/gi/salmonella-poultry-poster.pdf]

Today a friend who recently acquired a pet duck and a 2-3 month old hen sent us a link to a Seattle Times article (http://www.seattletimes.com/seattle-news/health/dont-kiss-chickens-6-sick-in-washington-with-salmonella/) about the dangers of handling poultry and contracting salmonella. The article reports 181 cases nationally, and 6 in Washington State, attributed to contact with backyard poultry. About 33% of cases nationally have resulted in hospitalization, with no deaths recorded. Although we have violated all the CDC rules about avoiding contact with poultry, other than being reasonably good about washing our hands before cooking or eating, in more than 10 years of close contact with chickens and geese, we haven’t been sick yet. However, that doesn’t amount to proof that what we’re doing is safe. So what’s the story about pet chickens and human health risks?

The Centers for Disease Control (CDC) has tracked salmonella cases for many years, and we recommend reviewing their statistics for a sense of perspective on salmonella. The CDC estimates 1.2 million U.S. cases of salmonella annually, with 19,000 hospitalizations, and 450 deaths. In 2014, the CDC’s traceable outbreaks of salmonella included 10 cases, with poultry exposure being one of the ten, at 363 cases, or 34% out of a total of 1,064 cases. Poultry exposure accounted for the highest number of cases among all 10 outbreaks, followed by 275 from contaminated cucumber, 166 from pet bearded dragons, and 115 from bean sprouts.

From a scan of CDC outbreak records during the past several years (see http://www.cdc.gov/salmonella/general/technical.html), I see a couple of patterns. First, live poultry exposure shows up every year with 400-500 cases, in the range of 30-40% of the total. Most of the other sources are contaminated foods, often chicken meat, but other meats, raw vegetables, and pets are common contributors. For example, in 2012 there were 473 cases from pet turtles, 334 from live poultry, 388 from mangoes and cantaloupes, 425 from raw tuna, and a few hundred others from various other foods.

There is some evidence that the number of poultry-related outbreaks increased somewhat between 1991 and 2012, with 45 outbreaks total, 1,581 illnesses (an average of 72 cases per year), 221 hospitalizations (10/year), and 5 deaths. It would be no surprise to learn that the increasing popularity of backyard chickens would be correlated with larger numbers of cases from that source, but my general sense is the increase in live poultry-derived salmonella has not been as great as the increase in chicken popularity. Perhaps the growth of backyard poultry has also focused more attention on hatchery sanitation practices (see below).

The traceable outbreaks represent about one in 1,000 of the total cases, and I couldn’t find any indication of whether we should consider those documented sources to be a representative sample of the entire 1.2 million cases. If so, then live poultry might represent 30-35% of the total risk of contracting salmonella, with most of the other cases coming from other pets, mainly reptiles, and from contaminated foods. I couldn’t find a clear message as to whether poultry can pick up salmonella from wild sources such as other birds, or whether they pose a risk throughout their lives rather than only as young chicks or ducklings. There are some hints that young chicks are the main source, and that perhaps the best way to avoid infection is to order from hatcheries that are certified as salmonella-free.

Apparently, the risk of salmonella from live poultry mainly comes from young chicks, and it’s often if not always traceable to particular hatcheries. We were a bit worried when we saw mention of a hatchery in Ohio as being the source of several recent outbreaks, including the one in 2015. Fortunately, our chicks for the past five years or so have come from Meyer Hatchery, which certifies that it’s birds are salmonella-free as well as typhoid and avian flu free (https://www.meyerhatchery.com/support.a5w). The source of outbreaks every year since 2012 is Mt. Healthy Hatchery. That one is certified clean for poultry typhoid, but not for salmonella or flu (http://www.mthealthy.com/page/345020265). We have no financial or personal interest in either company, but we’ve had good experiences with Meyer, including with their policy of shipping as few as three chicks at a time (with a $50/order express shipping charge).

To sum up, according to CDC data, the annual salmonella infection rate from all sources is 15.2 per 100,000 in the population. This means that on average, we have a 1% chance of catching the disease during a 75-year lifetime.  That’s not zero, but it’s pretty low. The probability of dying from salmonella is about one out of 230,000, or 4 in a million. Perhaps having close contact with pet chickens increases the lifetime risk of salmonella from 1% to 1.5% or a little more. Even that additional risk seems avoidable if we buy from clean hatcheries, and for us the pleasure of pet chickens seems well worth it.