While Naomi was painting at the spectacular Smith Rock State Park in Oregon, I wandered off a few miles to find a spot to hang out with the chicks. I sat in the skimpy shade of two desert junipers, and the chicks explored the nearby grass, brush, and dirt. I didn’t get many decent photos, but the one above captures part of the scene. Even on a warm day, sunbathing is part of the pleasure (see above).

Here’s Sophie with the water bowl I set up using a (human) drinking cup lid: 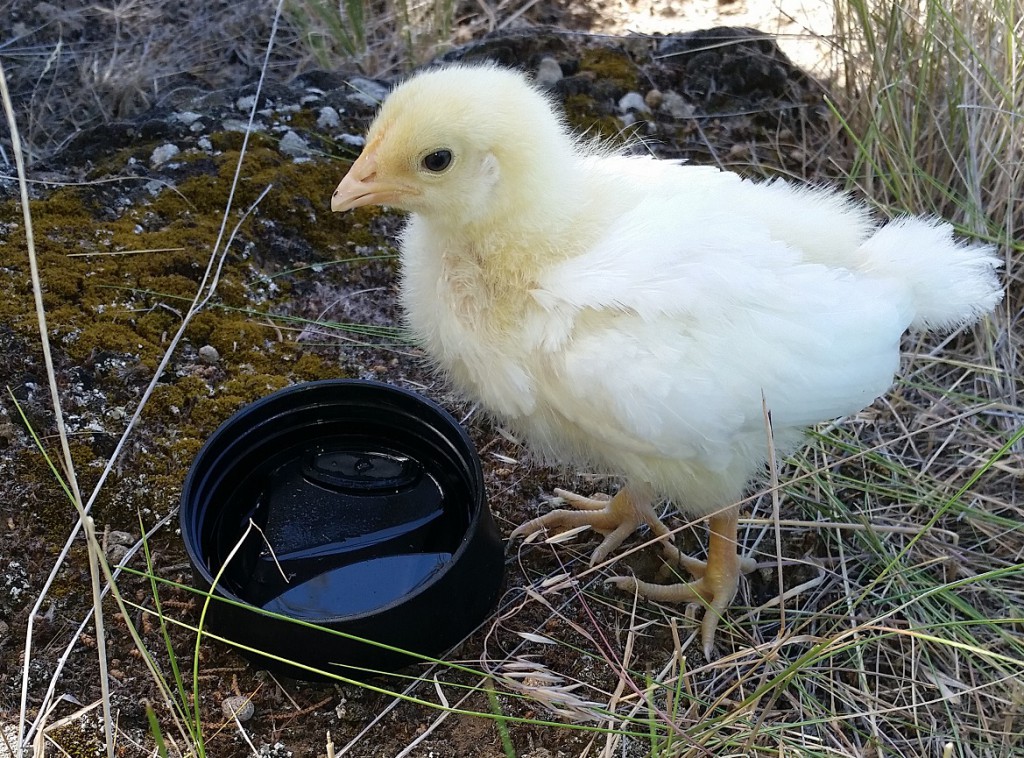 From the first few days after she hatched, it was clear that Sophie is unusually bold and adventurous. She loves to explore, and she has little fear, and intense curiosity, about the adult chickens. She spent a lot of time this day on my shoulders, flying up to my hat, and trying to get me to let her peck at my teeth. Some chicks at this age are apt to peck at a person’s eyes if they have a chance, so be careful about that. When they get a little older, they learn not to peck at our faces. It’s not that they’re trying to hurt anyone, but they’re curious about shiny objects. This includes earrings, which they’re pretty adept at removing, and possibly swallowing.

After a long and intense year of teaching, topped off by a month of pneumonia during the last weeks of Spring Quarter, and final exams, I was ready for a day of leisure, and this was a rare opportunity to spend most of a day just getting to know the chicks. I had reading materials, iced tea, a lap towel, and a piece of whole grain bread to feed the chicks. We spent about eight hours out there, moving from time to time to follow the limited shade. In just a few hours, I learned more about each chick’s personality, about how they communicate, and I could see how quickly they learn about a new environment. To some extent, I trained them to come when they’re called.

Because of Sophie’s boldness, I had been worried that she might get in trouble. But when a hawk flew fast and low at our position (coincidentally, not to attack the chicks), Sophie gave the alarm call and she was the quickest to dash for cover under my knees. We have a feeling that Sophie will continue to be quite a character as she matures.