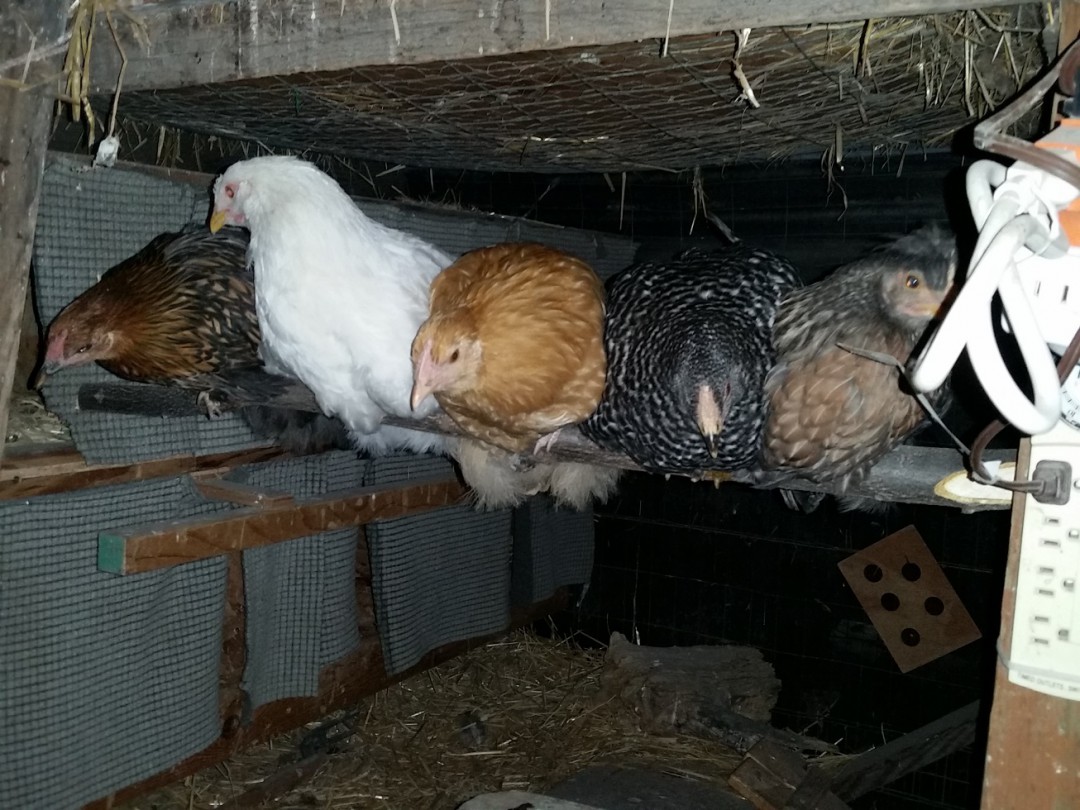 Integrating new pullets into the flock

Despite our best efforts, we seem to lose one to two chickens per year to illness or predators, so we’ve been on a schedule of about three baby chicks every second year, and this year we got the five chicks described in previous posts, after an unusually high loss rate in spring and early summer. A big question for many who want to maintain a backyard flock for the long term is “How and when should we integrate new birds into the flock?” We certainly don’t have all the answers or an ideal system, since we’ve learned so much by trial and error, and by adapting to what we have available, but here are some ideas…

It might help that we have more than enough free-range space, and varied environments, so if we had a flock of 50 instead of a dozen, the place would still not be confining. From what we understand, serious bullying is more likely in crowded conditions. A smaller yard might require more effort, construction of separate runs, and later integration. Our first step is to introduce new chicks to the outdoors and foraging, with the movable chick pen described in a June 24 post, when the younger three were a couple weeks old. This seems to allow the adults to become accustomed to having the chicks around, without being able to peck or chase them. Second, when the chicks are old enough and the nights are warmer, we start having them spend nights and part of the day in our nursery section of the coop. Below is a view of the nursery door, showing the curtained egg-laying boxes at the top. We have a large hinged door for cleaning and replacing supplies, a large sliding panel that we can pull out if we want all chickens to have access, and a restricted entrance (insert panel not shown) to keep adults out. 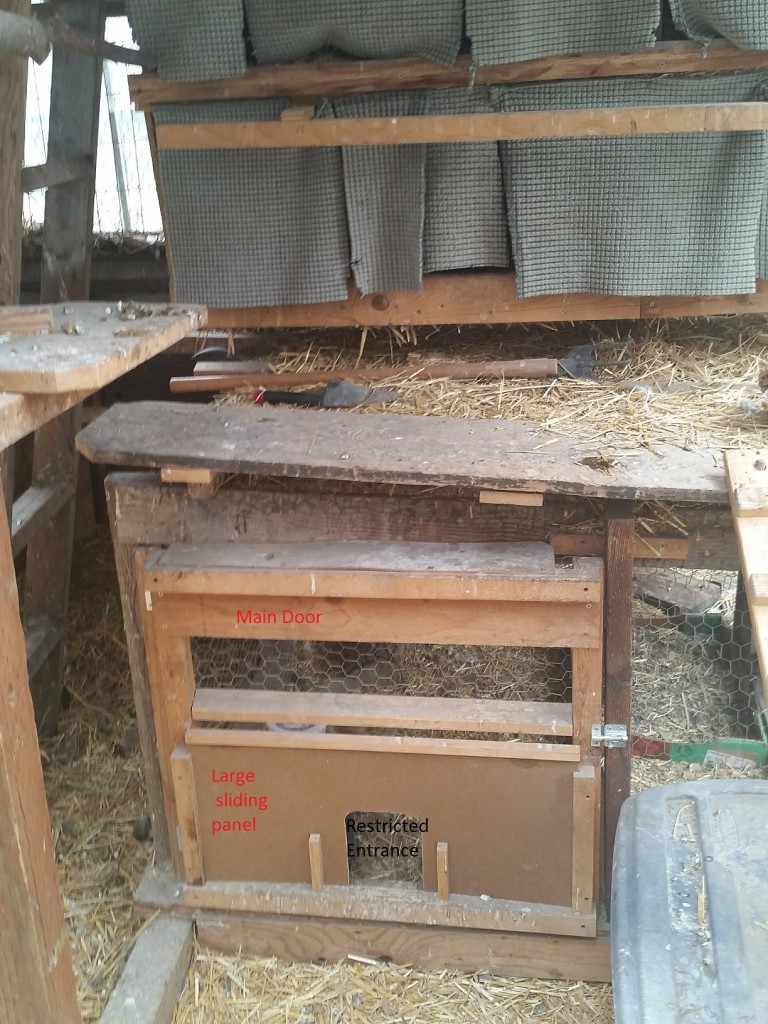 A view with the nursery door open: 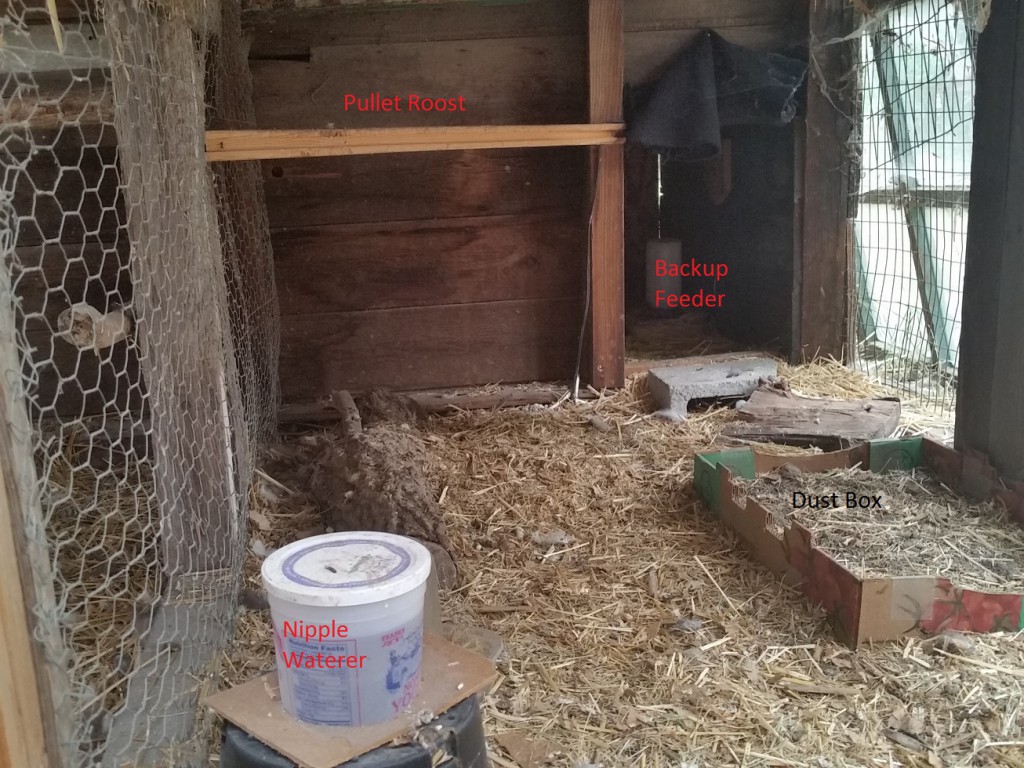 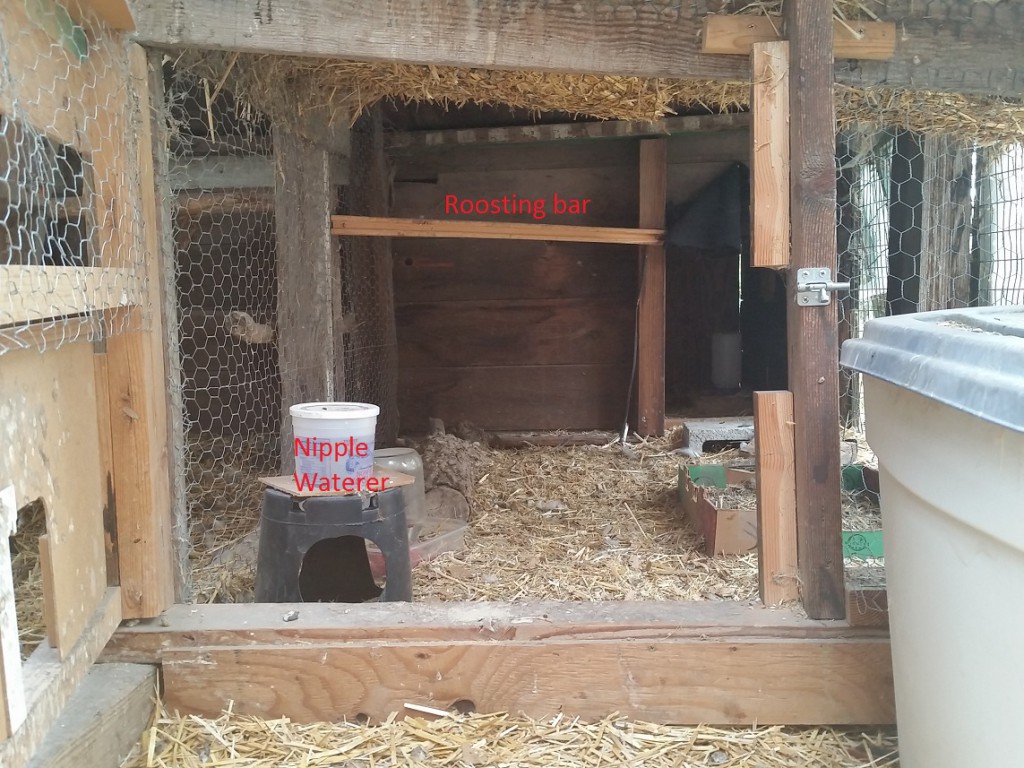 With this setup, we hand-carried the chicks to the nursery every evening, and closed the small entrance until morning. Within a few days they learned the routine, free-ranging all day, using the nursery for food and refuge, and lining up at the deck door every evening for a pre-bedtime visit. This week I installed a new, higher roost, as in the headline photo. The first evening I waited until after sunset, when the adults had all gone to bed, and hand-parked the pullets on the roost. They slept there all night. The next evening, I let them make their own decisions, and they all found their way to the new roost, except that Amy and Dori ventured up into the main roosting area to sleep. Everything seems to be working fine, and now we can take an end-of-summer trip without worrying about a lot of complications.

As these pullets mature, we expect them to become more normal members of the flock, and to form friendships with the older birds, even though they will be at the bottom of the pecking order. Essentially full integration with the flock at 10-11 weeks seems much earlier than most people experience or recommend, but it can be done.