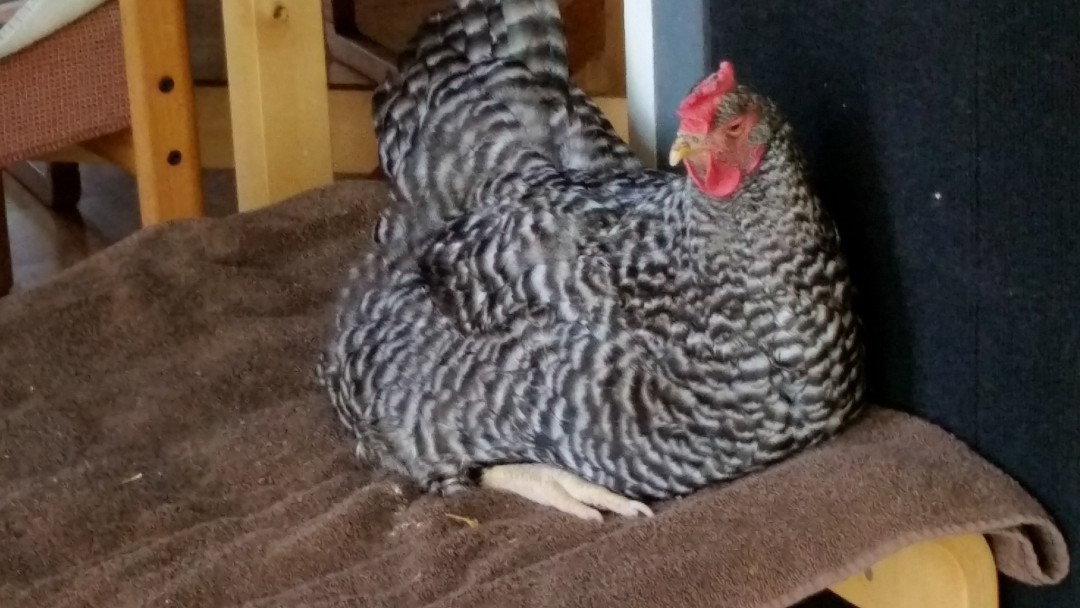 Kiki, the Barred Rock hen, is slowly getting over with the respiratory disease with a help from antibiotics. But she’s still vulnerable, and some other members in the flock are trying to taking advantage of her. On top of that, our rooster Leo has been chasing her and more violent toward her than other hens. Yesterday evening I found Kiki limping her right leg pretty badly. She could barely stand on both feet. So she was mainly lying down on her belly. I saw Kiki back in the coop, and I left her on the perch of the feeder, while bringing the eggs to the kitchen.

The next thing I saw was a commotion in the coop, when I was sitting down on the garden bench with my husband and other chickens. We saw Kumo, the Ameraucana hen, mounting Kiki for a while, trying to mate with her. Kiki is normally very submissive to start with. She was lying down on the floor with her neck stretched, and letting Kumo keep mounting, just like Leo does. I realized that Kiki just doesn’t have any strength to resist with her painful leg. I ran into the coop, and peeled Kumo off Kiki. For a moment, I wasn’t sure if she is dead or alive, even after picking her up in my arms. It seems possible that the hen could get killed in such a violent interaction if the partner is too rough. She could break her neck or something. Kiki was still alive, but seemed beaten up, physically and emotionally.

I’ve seen Kumo and a few other hens mounting others particularly younger hens, mostly in rather isolated spots. It’s not the matter of the absence of a rooster. Kumo is also very close to Leo, and hang out together all the time. So she’s not just lesbian. She sometimes get fed up by super aggressive gesture of Leo. Maybe that’s part of why she wants to pursue both ways. Anyway, Kiki tends to attract other hens. And this makes her more insecure. We just lost Molly, the Black Star, for egg yolk peritonitis last November. She was a very close partner of Kiki. But she’s now lonely.

I put her back in the loft of the coop for the night, as she was having a hard time walking. And this morning, I picked her up from the loft and let her stay in the house all day, while I was working on the computer by her. It was nearly 100 degrees outside today, and Kiki probably did not much activities outside. Since she’s been panting even in a normal condition, she’d have had a hard time catching breath with her limited lung capacity.  We all stayed nice and cool in the house till the evening. 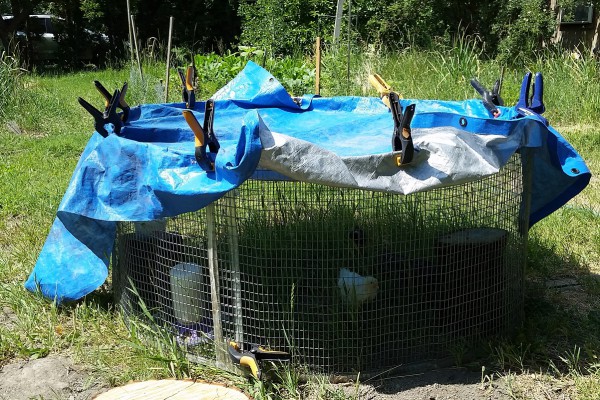 An outdoor pen for our growing chicks